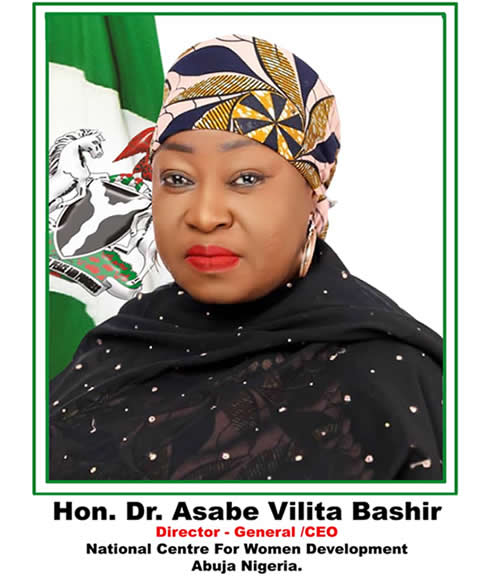 Hon. Dr. Asabe Vilita Bashir
It was Melinda Gates who noted, “When you lift up women, you lift up humanity.”

For Dr. Asabe Vilita Bashir a celebrated academic, a woman of substance and of course, a mother to many, the passion and burning desire to enlarge the frontiers of women development, inclusion in social affairs and amplifying their voices on issues did not suddenly emanate from the blues. Growing up late 60s from a humble background, like millions of other Nigerian girls in her Limankara community, Gwoza local government area of Borno state, her innocuous mind was directed to the fact that women deserve much more than they got in her immediate environment in terms of education, equal opportunity at workplace and indeed in the table of decision-making.

Determined to make a difference, shatter the glass ceiling and bring succour to the helpless and vulnerable in the society, after her primary and secondary education in 1979 and 1984 respectively, with the necessary assistance and support from her family, she proceeded to the University of Maiduguri where she obtained her First Degree in Chemistry and Mathematics in 1988.

A kindhearted soul, a woman of candor and unpretentious humility, she knew a tree cannot make a forest. This may have influenced her decision to mentor others when in 1989 she decided to take up a career as a lecturer in the Department of Education of her alma mater, a fulfilling experience that lasted till 2003.

The dream of obtaining a PhD in Educational Philosophy came to a satisfactory fruition in the year 2002 shortly before she left the classroom. Understanding that the political space will be a more virile platform to positively impact a larger number people and of course bring to bear her years of experience in the nation’s developmental discourse, Dr. Bashir was in 1997 elected into Borno State House of Assembly. And this feat was repeated in 2003. Her outstanding performance which hinged on the welfare, growth and development of her people while in the Legislative House did not go unnoticed as she was penciled down for near a decade assignment in the Executive when she was in 2005 appointed a member of Borno State Executive Council. Her administrative dexterity saw her traverse across various ministries as Commissioner in various Ministries.

After the catalogue milestone she recorded in these Ministries, she could not but heed her people’s call to represent them at the centre as she was elected in 2015 to represent the people of Gwoza, Damboa and Chibok Federal Constituency of Borno state.

While in the National Assembly between 2015-2019, she was the Deputy Chairman, Women in Parliament. As a lawmaker, she sponsored a Bill to ensure that all girl children are taken from street to school in the North, particularly her North East zone where insurgency has further exacerbated the challenge of out-of-school children.

Aside the area of education, Dr. Bashir deployed a robust advocacy mechanism in ensuring that the vulnerable group in Borno, particularly women and children, were given adequate care and attention.

Blessed with heart of gold, this dogged and relentless activist leads at the forefront in efforts to lift the burden of those under the weight of insurgency. Aside numerous intervention projects she initiated and completed, she made numerous cash donations to cushion the effects of hardship on her people of Gwoza, Damboa and Chibok Federal Constituency. With her Vilita Bashir Foundation which was officially launched in 2000 with the cardinal aim of touching lives, Dr. (Hon.) Bashir has over 100 students and widows on monthly stipends to assist them in their studies and cushion the effects of economic downturn.

It is therefore not surprising that the President, His Excellency Muhammadu Buhari deemed her fit for appointment as the Director General and Chief Executive Officer of the National Centre for Women Development. A highly detribalised and cosmopolitan goal getter, she enjoys the support and buy-in of critical stakeholders within and outside the shores of our great country. There is consensus that with Dr. Asabe Vilita Bashir at the helm of affairs in the NCWD it is indeed a new dawn and the beginning of a better bargain for Nigerian women.